At the occasion of COP25, Suez reinforces its commitment to the climate

As the world prepares for the COP25, to be held in Madrid from December 2 to 13, Suez Group has reaffirmed its commitment to fighting climate change towards the 1.5°C trajectory recommended by the Intergovernmental Panel on Climate Change (IPCC) and stepping up its own efforts to preserve water resources and the oceans.

By 2030, 40 per cent of the world population will be affected by drought. Aware of the urgent need to tackle global warming, Suez has joined the Climate Ambition Alliance, led by the Chilean government, by taking the “Business Ambition to 1.5°C, Our Only Future” pledge launched by the United Nations Global Compact last September. During COP25, Suez will send a strong message on adaption and reduction of greenhouse gases.

As part of its “Shaping Suez 2030” strategic plan, the Group has decided to step further in the climate commitments taken during the COP 21. Suez now aims to cut its greenhouse gas emissions of 45 per cent by 2030 – vs -30 per cent previously – in order to align its objectives with the 1.5°C trajectory. The Group also aims to help its customers avoid the emission of 20 million tonnes of CO2 annually by 2030, therefore doubling the original target of 10 million tonnes, by offering circular economy solutions to local authorities and industry.

Suez has already surpassed its target of tripling its alternative water production capacity by 2030 to preserve water resources, which are threatened by climate change. The Group is committed to bringing its customers 100 per cent sustainable and innovative solutions. For example, the Farfana wastewater treatment plant in Santiago de Chile converted into a biofactory, was awarded the United Nations’ Momentum for Change prize at the COP24. It reuses 100 per cent of wastewater, converting it into new resources: biogas to generate electricity or heat, and fertilizer for local farmers. The plant aims to be carbon neutral, to achieve zero environmental impact and to generate energy.

Protecting the oceans has been an integral part of Suez’s climate strategy for many years. Threatened by pollution coming at 80 per cent from earth and human activities, oceans play an important role in regulating the planet’s climate. The Group is developing solutions to avoid land pollution to reach the oceans, in particular at the wastewater treatment plants, and increase plastic sorting and recycling.

Bertrand Camus, CEO of Suez, says: “With world population set to reach 9 billion by 2030, it is vital that all stakeholders contribute to fight against climate change: the public, governments, businesses, NGOs, etc. Our activities are at the heart of the planet’s main challenges, that is why Suez is proud to be contributing to the COP 25 by increasing our greenhouse gas emissions reduction target to 45 per cent by 2030, and offering our customers 100 per cent sustainable solutions so they can join us in committing to the 1.5°C trajectory.”

Source: Suez Group (the company is responsible for the content) 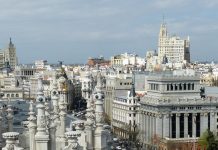