Within the automotive recycling industry there is growing concern about future economic developments, according to a recent survey of participants at the International Automobile Recycling Congress IARC 2019. The survey shows that around 38 per cent expect economic conditions for the automotive recycling industry to deteriorate over the next two years. A similarly high percentage, however, think business will remain stable. Only just over one quarter of those surveyed expect economic conditions to improve.

The results are slightly more encouraging when it comes to predicting future volume developments:

The basis for this synopsis of opinion is a survey organised by the IARC Steering Committee among participants at the annual IARC industry meeting. The results are summarised in the „Industry Barometer IARC 2019“ for the automotive recycling sector, which has been published for the first time at this year’s congress in Vienna. Although the results are not representative, they do meaningfully reflect a consensus of opinion across the sector.

In the survey, congress participants were asked to assess the current and future business situation from both a monetary and a quantitative point of view. The results show that current economic conditions are assessed as better than developments expected in the future:

The results are similarly positive in the evaluation of current volume trends:

When asked about the factors influencing business performance, the participants pointed in particular to the growing level of uncertainty surrounding global economic development. International trade conflicts, the slowing down of growth in China and the upcoming Brexit were named as the main points. However, the resulting impact on prices for nonferrous metals and scrap steel are very difficult to predict, they said. On the other hand, participants also stress that the economic outlook in Europe remains good – even though the pace of growth is likely to diminish somewhat in the course of the current year.

Two factors that continue to occupy the industry are the significant number of end-of-life vehicles exported to countries with lower waste disposal standards and the sometimes inconsistent legal requirements among EU states. Moreover, there are indications, particularly from Germany, that incineration capacities for high-calorific shredder residues are increasingly lacking.

The topic of electric mobility is also playing a key role and continues to pose a number of questions. Firstly with regard to the number of electric cars likely to be sold over the next few years and secondly regarding the materials that are going to need recycling going forward. The question of which type of ownership model for electric batteries is likely to prevail is also open. In general, a number of participants are warning that increased chemical regulation could have a dampening impact on recycling volumes.

„All in all, this survey shows that, in general, the actors in the car recycling industry eye the future with confidence;“ said Manfred Beck, Chairman of the Steering Committee of the IARC, summarising the results of this first Industrial Barometer IARC 2019 for the automobile recycling industry. “However, many uncertain factors, such as the international economic trade conflicts, the slowdown of the Chinese economy and the forthcoming Brexit, will determine the industry’s future. In addition, exports of cars from the EU to countries with less strict environmental standards and the differences in legislation between the EU Member States remain a real headache. E-mobility will become even more important in future and it remains to be seen how this trend will influence the industry.” 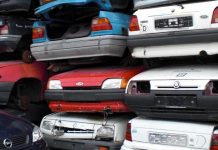