Jerusalem, Israel — A new waste transfer station in the industrial area of Atarot, in Jerusalem, has begun to take in waste from Jerusalem, making the transfer of that waste to the Abu Dis landfill unnecessary. This landfill was considered the last unregulated waste disposal site in Israel, and its use will soon be phased out completely. The new Atarot station can handle 600 tons of waste daily for now; in about a year, it will take in 1,300 tons – about the amount produced in and around Jerusalem each day. It will also be able to sort the waste for recycling.

The Abu Dis landfill is considered extremely polluting: The explosive landfill gas it produces is not treated properly, and poses a serious safety hazard. In addition, the landfill does not have the proper infrastructure to prevent gound pollution, and there is concern that it pollutes the groundwater as well.

The new facility is a closed waste transfer station built with advanced technologies that prevent odors. In August 2014, phase two is set to begin, in which the facility will sort and separate mixed waste as well as waste that is separated at source.

The Atarot transfer station, run by GreenNet, began taking in Jerusalem’s waste on Tuesday, February 4, 2014. The Ministry of Environmental Protection (MoEP) contributed NIS 17.6 million of the NIS 60 million it cost to establish the Atarot facility. This is the first transfer station to be built in the framework of the Recycling Revolution being led by the ministry, which includes funding for sorting facilities throughout the country. 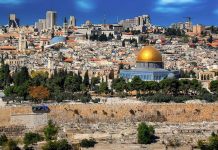