Start Forschung VTT: Textile waste can be made into fabrics even better than the...

Helsinki, Finland — The dissolving of textile waste offers the opportunity to return large volumes of waste to textile production. Novel and efficient methods will be able to recover cellulose molecules, providing one way of resolving the limitations soon to be placed on the use of landfill sites. Such methods will also serve to promote the efficient use of materials. VTT Technical Research Centre of Finland is currently developing methods for handling large quantities of textile waste material.

Finland, as with other countries in the EU, must make decisions on the future treatment of textile waste. The EU Directive set in 1999 contains quantitative restrictions for phasing in with regard to biodegradable waste deposited at landfill sites. The practice of taking textile waste to landfill sites will be brought to an end by regulations entering into force in Finland on 1 January 2016.

VTT, Aalto University and Tampere University of Technology are together developing novel recycled textile fibres in the Design World of Cellulose project, a major technological opening of Tekes – the Finnish Funding Agency for Technology and Innovation.

“Although reuse of textiles and mechanised recycling methods ease the burden on the environment, the textile mass also includes material in poor condition or heavily soiled, limiting the opportunities for recycling. The new methods multiply the utilisation possibilities,” says Research Professor Ali Harlin of VTT Technical Research Centre of Finland.

VTT is developing methods for restoring worn-out fibre to good-as-new condition. Research scientists are currently working on methods for separating the cellulose molecules contained in textile waste, such as cotton, using efficient and environmentally friendly solvents. Even the molecules of old and worn fibre qualify for reuse. The fibrous components of worn fabric can be separated and returned to textile production as raw material. The end result can be a product of equivalent quality to the original, or even better.

Several methods exist for dissolving cellulose, and these have seen notable development over the past decade. One example of such a method is Aalto University’s Ioncell-F, which uses ionised solvents developed together with the University of Helsinki. VTT’s role in the project covers cleaning the textile mass and preparing the cellulose in a suitable form for solvent application, while Aalto University develops the spinning processes.

VTT is developing methods for the recycling, decolouring, bleaching and dissolving of textiles. Textiles are fed into the process both intact and as loose scraps. Colour is then removed and the solubility of the cellulose increased. After the application of solvents and removal in solution, the recovered cellulose is then spun into fibre. The remaining fibrous material is normally polyester, which can be melted down and used in the preparation of fibres and composites.

“The manufacture of hygiene products and technical textiles will be possible in the very near future because the solvent, after decolouring, is also applicable in the recycling of pulp, for example from waste packaging. The manufacture of clothing textiles will take a little longer, but in any case this will not represent a major change for the textile industry,” says Research Professor Ali Harlin from VTT.

Finland consumes around 70,000 tonnes of clothing and household textiles each year. Estimates suggest about 30 percent of consumption is reused, with about 14 percent sent for recycling. The amount of textile and clothing waste in the Helsinki metropolitan area grew by 14 percent between 2007 and 2012 (8.9 > 10.2 kg/inhabitant/year). 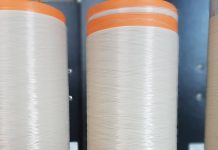 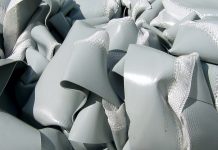