Start Unternehmen Veolia: A second life for 90% of the materials from former Jeanne...

Veolia has begun the dismantling operations that will involve pollution removal, deconstruction and recycling of everything possible from the hulk of the vessel formerly known as the Jeanne d’Arc. All operations will take place at the Atlantic Port of Bordeaux. The ecologically sound works cycle will guarantee staff safety and enable over 90 percent of the former French Navy teaching and training ship to be recycled.

Veolia won the European-wide tender for the full dismantling of the hulks formerly known as the Jeanne d’Arc and the Colbert on behalf of the Marine Nationale, the French Navy. The company’s teams are now set to begin work at the Atlantic Port of Bordeaux on the different phases that will give a second life to the materials contained in these two well-known ships.

The 32-month contract, worth 11.5 million euros, now enters into the active phase with quayside operations to remove pollution from the former Jeanne d’Arc. Ten months of work will be needed to remove all asbestos from the hulk. It will then go into Dock 3, which is 240 meters long, 35 meters wide and 15 meters high, to be totally broken up.

This six-month phase will involve cutting up, preparing, recovering and disposing of materials. “We’re aiming for a recycling rate of over 90 percent,” says Pascal Tissot, CEO of Bartin Recycling Group, the Veolia subsidiary with responsibility for the deconstruction. “That includes scrap iron, other scrap metals, waste electrical and electronic equipment (WEEE), cables, wood, and so on. Non-recoverable waste, such as asbestos and residual wastes, will be sent to appropriate facilities.”

All the operations will be carried out in compliance with French regulations on Installations Classified for the Protection of the Environment, with the site covered by an order of the prefect on the dismantling of end-of-life vessels.

More information on the dismantling can be found under veolia.com. 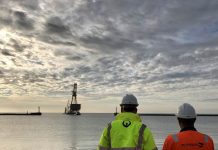 „We can unlock resources“: First offshore structure for decommissioning arrived