Bramhall, UK — Forbo’s „Back to the Floor“ take back scheme for installation off-cuts continues to expand as it heads towards its second birthday this autumn. Volumes of waste flooring are rising for recycling back into new Forbo flooring products and new mixed cushioned flooring collection trials have been launched. Launched in November 2012, this successful closed-loop scheme collects and reprocesses Marmoleum, Tessera Carpet Tiles, Flotex, cushioned vinyl and Smooth Vinyl installation off-cuts.

New members from a wide variety of different sectors are joining the scheme. The latest being Worcestershire-based Educational Art & Craft Supplies which responded to a letter sent out to key customers outlining the benefits of participating and how they can join. This family-run business is literally demonstrating the ‘art of recycling’ flooring off-cuts. It buys 240 rolls of Marmoleum a year for its range of linoleum and block printing products, including Essdee Scraperboard, that are supplied to education wholesalers and retailers worldwide.

Having already filled three large one-tonne Marmoleum bulk bags with off-cuts in the first two months, Directors Chris and Stephen Yeomans are convinced that closed-loop recycling is the right way to go – and they’ll get their old off-cuts back in new supplies. “We signed up knowing that our 10 tonnes per year of off-cuts will be recycled and we’re going to be saving money on landfill costs,” says Chris  Yeomans. “It’s also a good thing to do. There’s no point in burying this material when it can be turned back into new products.”

Forbo’s scheme, two years old this autumn, has launched a trial collection of mixed cushioned flooring off-cuts, including its own and other brands of cushioned flooring. It’s the only aspect of the scheme where different brands of mixed flooring, other than just Forbo’s, are accepted for recycling. The off-cuts are sent to Forbo’s factory in Ripley where they are added to the manufacturing process and used to make the backing for Flotex and Westbond carpet tiles. Mercado in Leeds took part in the trial by collecting cushioned flooring off-cuts, which were sent to the Ripley factory to be tested.

Back to the Floor Scheme Co-ordinator Michelle Brewer comments: “This initial material was of sufficiently high quality for recycling, so a selected number of distributors are being offered bins. As a welcome extension to the scheme, it provides a new exclusive recycling outlet for this type of flooring.”

Back to the Floor plays a key part in Forbo’s drive to reduce its environmental impact by 25 per cent by the end of 2015 through applying its 4R’s – Reduce, Renew, Reuse and Recycle. Forbo believes environmental responsibility begins with the way products are designed and raw materials are sourced. The re-use and recycling of both internal and external waste PVC has led to increased recycled content backings in its products.

Forbo’s General Manager UK and Ireland, Angus Fotheringhame comments: “We take our environmental responsibilities seriously. Back to the Floor is evidence of this commitment to closed loop recycling and ‘creating a better environment’ for future generations.” And he adds: “The scheme grew from a realisation of the importance to recycle all waste generated from our products throughout the supply chain. It’s the right thing to do, and having developed our internal processing capacity to meet our Green Design requirements, it’s something we can do.” 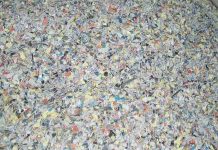 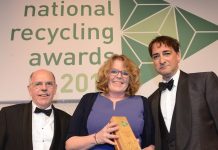 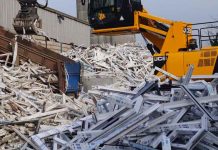