Amsterdam, Netherlands — Bulk Handling Systems Europe, Nihot Recycling Technology  and National Recovery Technologies are once again returning to the RWM trade fair to showcase the companies’ integrated recycling solutions. But unlike previous years, the booth will also showcase new equipment. In May, Nihot unveiled the Single Drum Separator (SDS)  i-Series, announcing numerous improvements to the successful SDS 650 and SDS 800 models. This month, Nihot is excited to present these features to the show’s many attendees.

The SDS i-series features numerous improvements over previous models, including improved separation results and straightforward adjustability. “We listened to our customers,” said Nihot’s Sales Manager Joep Barenbrug. “Whereas the previous model required to be turned-off to adjust the settings, operators can now make adjustments easily and while in operation. The i-Series features a self-supporting frame and in-line design that enables it to fit in a single shipping container. It will show up fully assembled and ready to perform at a high level.”

According to Nihot, the SDS i-series looks great and its performance offers a really impressive feature. The fully redesigned i-Series is the industry’s leading solution for assuring density separation. It will initially be available in two sizes, the SDS 650-i and SDS 800-i. Both are self-contained, plug-and-play units that use negative pressure to separate materials based on density and shape. These durable, highly efficient machines offer customers a fast return on investment.

The SDS 650-i and SDS 800-i can be used in a number of applications, including Construction and Demolition (C&D), Single Stream Glass Cleanup, Municipal Solid Waste (MSW), Commercial and Industrial (C&I), Auto Shred Residue (ASR), E-Waste (WEEE), Compost, Biomass, Metals and Incinerator Ash, among others.

At the RWM trade fair on 16 – 18 September 2014 in Birmingham, Nihot has a fully operational demo unit that is used to demonstrate the unit’s precise separation efficiency and value. It can be visited in Hall 5S06, Stand T07. 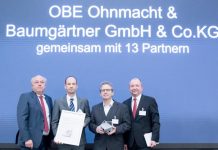