Genoa — The spot iron ore prices fell to the lowest of the last six months. They lost nearly 9 per cent in January following the weaker steel prices in China and the high stockpiles available for the Chinese steel makers. Considering that the rising of the worldwide supply and the expectation that the China’s steel output will grow this year at a slower pace, the question is: Is iron ore in trouble or not? Will the prices fall as long expected or is this just another Chinese inventory cycle? Maybe the answer is both.

Prices will move down during the year even if supported by the Chinese demand. In short, the high iron ore inventories in China and the increased supply capacity coming this year could rebalance the spot iron ore average price in the range of $110/120. The other metallic raw materials will follow that trend.

Talking about Italy, the steel production restarted from the second week in a well-balanced offer and demand situation, which maintained the domestic market quite. The weekly prices remained unchanged until the last days of the month, when mills have made some 5 € reductions. The monthly contracts for the European import scrap were also unchanged, with only few small reductions on the highest prices. The deliveries to the mills have been enough to cover the needs, maintaining the mills inventories more or less the same.

After the very large arrivals at the ports seen during the last three months of 2013, the volumes in January returned to the normal range. In detail: abt 38 Kt scrap, abt 90 Kt pig iron and abt 48 Kt HBI. The scrap collection has been limited by the negative weather conditions in several European countries during the last week of January, and it seems that the difficulties will affect also the first February week. Even if late, winter will arrive.

The downward movements on the international prices will condition the February market, as the Turkish mills target is to purchase only cheaper scrap. Moreover we have to take into consideration the negative weather conditions in Europe. Looking at that all, prices will be expected to decrease of some Euros.

Nothing new is to be said about the Ilva Taranto. The expensive clean-up and revamping works are in progress, and the steel production is still at low level also due to the lack of orders for the big welded pipes.

The arrivals reported in January are – on standard range after the last three months – highest. The pig iron inventories at ports and mills are always well recovered. The last pig iron offers are quoted around $405/410 pmt CIF for Feb/March shipment. It is quite a few months that Venezuelan and Libyan HBI is not offered, due to some technical issues of the plants. The last HBI price indications are around $ 355/365 pmt CIF Italy. 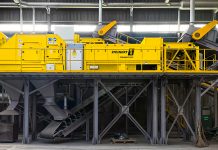 STEINERT succeeds in Reducing the Magnesium Proportion when Processing