Paris, France  — The European Recycling Platform has announced a cooperation agreement with the Swedish Electronics Recycling Association Elektronikåtervinningsföreningen (EÅF) to provide its full range of services on the Swedish market. This decision was strongly driven, amongst other factors, by the increasing number of requests received from international electronics manufacturers that already are ERP members and that wished to enjoy ERP’s efficient recycling model and know-how in Sweden, too.

ERP will begin operating in Sweden this month (June 2014) and producers can immediately start activating their memberships with ERP. Given the proximity and in certain terms similarity between the two countries, ERP’s Danish Country Manager, Martin Therkelsen, has been designated – together with EÅF’s Managing Director, Josef Tapper – to assist EÅF in its entrance in the ERP network.

Martin Therkelsen explains that ERP’s international clients have long wished to include Sweden in the take-back services they are receiving from ERP in other European countries. ”Sweden is the largest country in the Nordic region, with a long tradition of collecting and recycling electronic waste,” he points out. “The country has substantial industries in the electrical and electronics sector, with exports to many European countries, and it is also a major importer of electronic goods from abroad. We are very pleased that ERP has entered the Swedish market and look forward to welcoming Swedish companies with international operations into our international network and collection system.”

EÅF began its collection system in 2007. The system is currently owned by the manufacturers themselves and includes an insurance scheme that provides coverage for future costs associated with collection for recycling activities. “I look forward to a long-term and close cooperation with ERP,” says Josef Tapper, Managing Director of EÅF. “I’m sure that this cooperation will bring about improved and increased recycling of electronics in Sweden and even healthier competition for producer responsibility on the Swedish market.”

ERP directly delivers solutions for the return of electric and electronic waste in 15 countries in Europe and, since it began operating, it has collected and recycled more than two million tons of electronic waste. 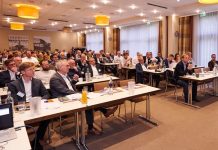