The very first International E-Waste Day is being held on the 13th October to promote the correct disposal of electrical and electronic equipment throughout the world.

International E-Waste Day has been developed by the WEEE Forum, an international association of e-waste collection schemes, and 26 of its members and involves around 40 different organizations in 20 different countries worldwide. It is being used to raise the public profile of e-waste and encourage consumers to correctly dispose of their e-waste with the resulting increase in re-use and recycling rates on the day itself and into the future.

It is estimated that 50 million tonnes of e-waste will be generated globally in 2018. Half of this is personal devices such as computers, screens, smartphones, tablets and TVs, with the remainder being larger household appliances and heating and cooling equipment. Only 20 per cent of global e-waste is recycled each year, which means that 40 million tonnes of e-waste per annum is either placed in landfill, burned or illegally traded and treated in a sub-standard way and this is despite 66 per cent of the world’s population being covered by e-waste legislation. This results in the huge loss of valuable and critical raw materials from the supply chain and causes serious health, environmental and societal issues through illegal shipments of waste to developing countries.

An important and timely initiative

Initiatives being undertaken by participant organizations are meant to increase consumers’ knowledge about e-waste and how to dispose of it correctly. These are many and diverse and include conferences, events, school and city collections, promotions in stores and recycling centres and an online guide for proper e-waste disposal. All of these will be promoted locally on and around the International E-waste Day. Karmenu Vella, EU Commissioner for Environment, Maritime Affairs and Fisheries said: “This is an important and timely initiative because e-waste continues to increase in volume and the materials it contains are essential for manufacturing new products and satisfying consumer demand for e-products.”

He continued, “Even in the EU, which leads the world in e-waste recycling, only 35 per cent of e-waste is officially reported as properly collected and recycled. Awareness raising initiatives impacting positively on collection rates will not only help member countries achieving the WEEE Directive’s targets but also help Europe in developing the Circular Economy.” Pascal Leroy, Secretary General of the WEEE Forum, added: “Consumers are key to better management of e-waste and we have high aspirations that this campaign can have a huge impact on their habits. For example, in each household in Belgium there are an average of 79 electrical items as well as 47 lamps, which makes getting e-waste out of homes and businesses and into re-use and recycling plants a critical part of the challenge.” 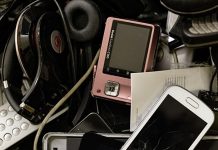