Brussels — Out of 3.147.000 tonnes of PET bottles and containers placed in the European market in 2016, a remarkable number of 59.8 percent – in total 1.880.900 tonnes – were collected and thereof 1.773.200 tonnes mechanically recycled. These conclusions come from the annual PCI Wood Mackenzie PET recycle survey for West Europe in 2016, commissioned by Petcore Europe. It shows that the collection rates increased by 7.4 percent, while the recycling rates also grew by 7.3 percent. In 2016, that resulted in 129.400 tonnes more collected and 120.000 tonnes more recycled PET compared to 2014.

„These PET collection and recycling rates are unreached in the plastics packaging industry while it is worth mentioning that PET recyclers still have unexploited capacities for recycling,“ states Paola Arlotti from Equipolymers, Petcore Europe President. „The figures clearly outline the crucial role of PET in a Circular Economy and for reaching the plastics recycling targets currently discussed on EU level.“

The top 5 in PET collection

When it comes to more country specific figures, the survey reveals that the combined volumes reported for France, Germany and Italy represent 47.9 percent of the total volume collected in the region, continuing the gradual decline in the top three’s share (48.5 percent in 2014 and 53.3 percent in 2011). These three largest countries in terms of collection volumes are now joined by two other countries that contribute a significant proportion of the regional total, namely Spain and UK. The combined total share of these five countries in the overall EU collection accounts for 70.9 percent.

The survey outlines a slightly more positive picture on the clear bottles amount compared to the previous years. Clear bottles accounted for 17.3 percent of the complete stream revealing an increase of 2.1 percent on the 2014 share and the first increase in share in five years.

„This is an encouraging sign for recyclers and hopefully this increased share is set to continue,“ outlines Christian Crepet, Petcore Europe Executive Director. „However, the quality of bales with additionally a total share of 26.4 percent clear/light blue bottles, 25.5 percent mixed colours including green/brown bottles, and 30.8 percent of unspecified mixed colours clearly continues to challenge the recycling industry. Therefore, we believe that there is a vital need for a detailed analysis of the unspecified waste stream which will be part of the 2018 study commissioned by Petcore Europe.“

„As regards the quality of the bales, a shift to more high quality markets also requires a stable and high level sorted input,“ states Casper van den Dungen, Petcore Europe Vice-President. „The survey confirms an increased waste ratio at the recycling stage. Therefore, efficiency increase in collection and sorting is needed and would also contribute to the cost reduction of the total system in the long term.“

Compared to 2014, the capacity increased by 2.5 percent and the actual processed volume grew by 7.2 percent. With an actual processed PET amount of 1.773.200 tonnes and the nominal input capacity of 2.147.600 tonnes, the industry average operating rate approached 83 percent in 2016, compared to 79 percent in 2014. „This is a positive result, especially considering all the challenges that the r-PET industry is facing: low virgin resin prices, r-PET pricing, pressure on margins, decreasing quality of bales and rising process loss,“ states Christian Crepet.

With 38 percent the major market for r-PET in 2016 remained sheet, followed by blow-moulding applications with 26 percent and fibres with 24 percent. The remaining just over 11 percent are used for strapping and other applications.

The complete report is available for all Petcore Europe members via the members section on the association website petcore-europe.org. Non-members can request the report directly at PCI Wood Mackenzie  contacting Helen McGeough via Helen.mcgeough@woodmac.com. The complete survey results will be presented more in detail during the annual Petcore Europe Conference 2018 taking place in Brussels on 7-8 February 2018.

Europe Waste Recycling Services Market to Reach Valuation of US$ 242... 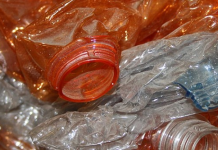