Supermarkets produce over 26,000 miles of till receipts weekly – to be wasted

York, UK — British supermarkets issue over 26,000 miles of till receipts every week in the run up to Christmas – more than enough paper to go around the entire circumference of the world. And virtually all of it is wasted. These are the findings of BusinessWaste.co.uk. The waste management agency has calculated that around 270 tons of till receipts are printed out for customers, many of which are thrown straight into bins along with non-recyclable single-use carrier bags.

According to BusinessWaste.co.uk, stores that print out additional offers along with the legally required receipt make the problem worse by producing paper that customers almost always ignore. „It’s gone beyond ridiculous to become an epidemic,“ comments BusinessWaste.co.uk spokesperson Mark Hall. „Just popping into a big-name convenience store for a lunchtime sandwich can produce a good couple of feet of paper. Factor in the estimated 150 million supermarket and convenience store transactions every week, and a couple of feet soon turns into thousands of miles.“

Prompted by a massive till receipt from one of the UK’s „Big Four“ supermarkets, BusinessWaste.co.uk decided to find out exactly how much paper goes into recording Britain’s weekly shopping habits. „We found out very quickly that people don’t just go to grocery stores for a weekly ‚big shop‘,“ said Hall. „In fact, the huge majority or trips are people just popping in for one or two items. The end result for these millions of transactions is usually the same – wads of unnecessary paper.“

BusinessWaste.co.uk found that in extreme cases, a customer can sometimes leave a store with till receipt, separate bank card receipt, money saving offers, „You saved… compared to our competitors“ promotions and loyalty vouchers to collect. „While the receipt itself is a requirement, it’s the reams of promotional material to which we object,“ underlines BusinessWaste.co.uk‘s Mark Hall. „Customers are left walking away with armfuls of ticker tape that they often bin, along with their carrier bags.“

A re-think of till receipt output

The UK-based recycling and waste experts took the grocery industry’s own figures for the number of transactions every week, and combined them with a conservative average for till receipt lengths from UK’s major supermarkets and grocery stores. According to BusinessWaste.co.uk, those estimated 150 million weekly grocery transactions equate to 26,000 miles of paper, more than enough to reach around the world’s 24,000 circumference; 270 tons of paper, most of which is discarded rather than recycled; and a year’s worth of till receipts would reach from the moon and back – twice.

Calling on supermarkets to cut down on this waste, BusinessWaste.co.uk congratulates Sainsbury’s for printing on both sides of the till roll, halving paper output at a stroke. „We’re winning the battle on single-use carrier bags,“ Mark Hall is sure, „but stores are slipping into other bad habits that are just as wasteful“. In his opinion, better use of e-vouchers and a re-think of till receipt output would virtually eliminate the issue, not to mention save most stores money on paper and ink.

Mark Hall balances: „The frightening thing is that we’ve only confined this to grocery stores in the United Kingdom. Add in other business sectors like DIY warehouses and petrol stations, add in the rest of the world – that weekly till roll is going to wrap the world up like a gift bow, and that’s not a good thing.“ 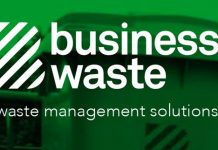