Florence, Kentucky / USA — The National Association for PET Container Resources (NAPCOR) and The Association of Plastic Recyclers (APR) has announced the release of the Report on Postconsumer PET Container Recycling Activity in 2016. The report cites a 2016 United States recycling rate of 28.4 percent for polyethylene terephthalate (PET) plastic bottles, reflecting a decline of 2.4 percent in total collection volumes and an increase of over three percent in the total volume of PET bottles available for recycling in the U.S.

“This was a strong year for PET bottle market growth, but another difficult one for the PET recycling industry. The challenges we saw in 2015 – low virgin resin pricing and uncertain demand in both recycled scrap and RPET end markets – continued to impact the industry in 2016,” balanced Tom Busard, NAPCOR Chairman, Chief Procurement Officer for Plastipak Packaging, Inc., and President of Clean Tech, Plastipak’s recycling affiliate. “Despite these obstacles, the volume of PET collected in the United States and utilized by domestic reclaimers stayed consistent with that of 2015, and RPET used in domestic end market applications was up.”

The recycling rate is derived by using the total volume of recycled PET material purchased by both U.S. processors (reclaimers) and export markets in 2016 – 1,753 million pounds – taken as a percentage of the total volume of PET resin used in U.S. bottles and potentially available for recycling, 6,172 million pounds. Of that 1,753 million pounds collected, 1,374 million was purchased and processed by domestic PET reclaimers, with the balance of collected material, 379 million pounds, sold to export markets, including Canada. This was the lowest export volume reported since 2004, comprising 22 percent of the total postconsumer PET volumes collected. Exports to Asia and other markets outside North America dropped 11 percent over 2015, marking the sixth year of off-shore export decline.

“The PET recycling industry has taken some knocks this year, yet continues to demonstrate its strength in terms of consistent domestic material purchases and robust use of RPET in end market sectors,” said Steve Alexander, APR President. “This is an established, vibrant and resilient industry, but its significant challenges make it increasingly incumbent upon the broader value chain – from collection to end market users – to address key issues, including increasing the quantity and quality of collection, designing bottles for recyclability, and fostering strong end market demand.”

In terms of RPET used in U.S. and Canadian end market applications, total volumes increased by over 5 percent to 1,501 million pounds in 2016. Fiber, bottle and strapping markets all showed growth in 2016, while RPET use in sheet and thermoforms dropped, most likely due to the impacts of low virgin prices on this market segment.

Both NAPCOR and the APR continue to work to address the industry’s ongoing challenges, with particular focus on how to maximize the capture of PET from the waste stream, improve efficiency in processing and reduce non-PET contamination in recycling streams, and encourage awareness and understanding of The APR Design® Guide for Plastics Recyclability. This is the twelfth year that NAPCOR and the APR have partnered to produce this report and the twenty second year that it’s been issued by NAPCOR in its current format.

The full Report on Postconsumer PET Container Recycling Activity in 2016 can be found under napcor.com. 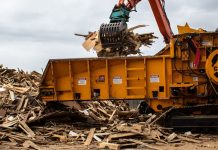 A sharp increase in material recycling of waste wood