São Paulo, Brasil — Astronauts on the International Space Station (ISS) may by 2018 start using a recycler of plastic objects and packaging that would improve the autonomy and sustainability of future missions beyond the planet. The initiative represents a partnership between Braskem and Made In Space, the U.S. based leading developer of 3D printers for operation in zero gravity and a supplier to NASA. This will be the first commercial plastic recycling operation in the history of space missions.

Last year, the partnership adopted Green Plastic, a bio-based resin made from sugarcane, for the printing of tools and spare parts by astronauts. The recycler, which should reach the ISS in the latter half of 2018, will complete the plastic cycle with innovation, efficiency and sustainability. The invention will help cut the costs of space missions and reduce the weight of payloads carried from Earth.

„There is significant potential for plastic recycling on the ISS. For example, food packaging can be used to make objects for use by astronauts instead of being discarded. In the future, the recycler and the 3D printer will form a single package that will increase the autonomy and sustainability of long-duration space missions,“ commented Andrew Rush, Made In Space President & CEO.

The machine consists of a plastic crushing and extrusion system that produces a filament to be used by the 3D printer already installed on the ISS. The recycler will allow astronauts to, among other applications, use the Green Polyethylene tools and parts previously fabricated by the 3D printer, as well as other plastic materials such as food packaging already on the ISS that no longer are being used.

„Taking the first plastic recycler into space is a massive challenge and a source of great pride for Braskem. This second phase of our partnership with Made In Space will close the plastic cycle sustainably, from the production of Green Polyethylene made from sugarcane to the recycling of polymers for other applications,“ said Patrick Teyssonneyre, Director of Innovation & Technology at Braskem. 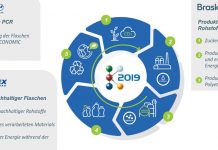