Brussels — The plastics recycling industry had become “insanely dependent” on China and so its recently-announced import ban has left suppliers in other parts of the world not so much with a cold but rather with “pneumonia”, argued BIR Plastics Committee Chairman Surendra Borad Patawari of Gemini Corporation at its latest meeting, held in New Delhi on October 16. China and Hong Kong together imported 10.2 million tons of plastics scrap in 2016 – but this figure is likely to nosedive next year, he warned.

According to a report submitted by Dr Steve Wong, Executive President of the China Scrap Plastics Association, officials in China have confirmed that plastic scrap import licences will be issued for 2018. However, these are likely to be handed only to those consuming factories boasting clean records and full compliance with environmental regulations. As a result, imports into China could fall to 30 – 40 percent of normal levels next year, leaving overseas suppliers to find alternative outlets for perhaps 6 or 7 million tons of plastics scrap, Borad Patawari indicated.

The value of certain materials shipped in containers have crashed to zero – and beyond – in some instances; conversely, plastic scrap prices within China have soared as much as 20 – 30 percent on the back of shortages, it was reported. The import ban has also led to the transfer of scrap processing capacities to other countries in the region such as Taiwan, Indonesia, Malaysia and Vietnam.

Recycling market to be organized much more formal

According to guest speaker Rajesh Gauba, Vice President of Recycling and Sustainability at major Indian business Reliance Industries, China’s new import policy will help boost its domestic recycling rate from the current low level of around 22 percent. Indeed, he anticipated that China’s PET collection volumes will climb from 3.1 million tonnes in 2015 to nearer 4.1 million tonnes next year.

As for plastics waste in India, Rajesh Gauba argued: “We need to organise the recycling market in a much more formal way as currently it is dominated by the informal sector.” Fellow guest speaker Mani Vajipey, Co-founder and CEO of Hyderabad-based technology solutions provider Banyan Nation, reckoned that around 80 percent of polyethylene and polypropylene recycling in India happens within the informal sector. The latter went on to outline his company’s development of an SMS-based technology platform to help streamline the collection and sourcing of post-consumer and post-industrial waste.

In his report on the Indian market, Borad Patawari estimated the country’s plastics scrap imports at around 150,000 tonnes per year.

A shift in material flows

Focusing on the European market, the report submitted by Renaud Pfund of Veolia Propreté France Recycling noted a shift in material flows as a result of China’s import policy, including baled LDPE film now heading to Spain and Portugal for sorting and regeneration rather than to Asia.

Reporting for the Middle East, Mahmoud Al Sharif of the UAE-based Sharif Group of Companies said that many of his region’s exporters have found alternative markets to China and that local scrap prices have increased of late following improved prime values. 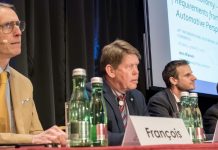