Some weeks ago, media of many countries reported about the results of a study which was conducted by US-based Orb Media Inc., a team of journalists, structured as an US-based non-profit organization. Their investigation showed that plastic fibers were found in more than 80 percent of tap water samples – worldwide. According to the information, the highest amount of microplastics was found in the USA (94 percent of samples) and the least in Europe (72 percent of samples). “The only way to keep plastic out of the air, water and soil is to radically rethink its design, uses, sale and disposal,” Orb Media says and refers to ways to solve this problem, including circular economy and waste-to-energy.

Kate Bailey, project director of US-based Eco-Cycle Solutions, feels that recycling is the “awkward fifth wheel at the sustainability party”. While sustainability, climate resilience and circular economy would continue to gain momentum, “the importance of recycling, and its relevance to all these issues, seems lost,” she wrote into the company’s blog. “Check out the agenda of any major environmental or sustainability conference and you’ll be hard pressed to find a single session on recycling.” She is convinced that recycling is essential for solving some of the greatest issues of our time: It is one of the best ways “to save energy in the extraction, processing and manufacturing of products and packaging” – and creates jobs.

But there is another development that could interfere with recycling: China, one of the largest economies of the world, has put an import ban on plastic scrap. This has caused a chain reaction of impacts on the plastic recycling industry, affecting not only the recyclers in China, but also other exporting countries. About 5 percent of Chinese recyclers would switch to recycling of domestic plastic waste which could be pursued only by large firms, another 5 percent were considering to move their operations to other parts of the world, information provided by the media said. “About 80 percent of recyclers have to remove themselves from the market”, a Hong Kong based company cited a report.

China’s import ban applies to recovered paper as well. As reported by the “South China Morning Post” in mid-September, Hong Kong’s exporters warned of a wave of business closures in the next few months as they began a strike – which was initially planned to last for at least a week but ended five days earlier – over import restrictions in mainland China. According to the information, recovered paper piled up at three of the city’s docks and the exporters’ storages.

The People’s Republic of China is certainly not against recycling, as Chinese enterprises invest abroad and purchase the latest technology (page 30 in this issue). There are also business opportunities in several parts of the world: in Estonia (page 4), Ukraine (page 18) and Indonesia (page 26), to name but a few. And you will find an overview of the East and Southeast Asian e-waste on page 23. 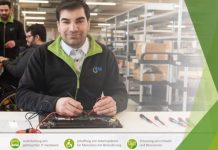