York, UK — Few days ago, the Daily Mail published an article titled „Beware the bin lorries with seven spy cameras which will snoop for evidence that you are breaking rubbish rules“. Bin lorries for 166 councils carrying cameras were interpreted as trial and catching out of people. But the reasons are different, argues Mark Hall, spokesperson for UKs waste management agency BusinessWaste.co.uk.

The police needs to wear body cameras as they work. The same technology should also apply to bin men, and have laid out a case to add body cams to their uniforms, Mark Hall underlines. The tiny, wearable cameras used to record the often eventful shifts of police officers on duty are unquestionable proof of any unethical behaviour, as well as helping to exonerate officers accused of crimes they didn’t commit. According to BusinessWaste.co.uk, they could do the same for our waste collectors.

Mark Hall underlines: “Bin men often face accusations of poor behaviour from the public, whether that’s claiming they haven’t collected valid waste, have made a mess during their rounds, or have been rude and abusive during their shifts. We recommend to all councils to add body cams to their bin men’s uniforms to counter these accusations, and help improve the reputation of these vital workers to give them the respect they deserve.”

BusinessWaste.co.uk says that among the problems that could be solved with this camera footage are over-filled bins, waste in the wrong bins, bins that haven’t been put out, and general conduct from bin men on their rounds. In more than 80 per cent of cases where residents complain about their waste collection services, the resident themselves is found to be at fault, but this doesn’t stop the bin men suffering reputational damage.

Over-filled bins – Mark Hall states – are a common complaint among bin men, with bins that have been over-filled often being messy and difficult to empty. A resident complaining of mess, and who has also over-filled their bin, can be shown to be responsible for the mess with the footage from a bin man’s body camera. And waste collectors are not duty bound to collect waste that has been put into the wrong bin, which can cause all kinds of problems at the processing end. That means leaving behind bins that have been improperly used, something that can be shown with a body camera to have been the reason for leaving a bin un-emptied.

Missed collections can also incur wrath from the public directed towards bin men, so body cameras can help to protect them from harm or prove what has happened, as well as showing instances where bins were not collected because they were not put out. BusinessWaste.co.uk emphazises that the slight increase in cost for these cameras is more than worth the money to protect waste collection workers of the UK. 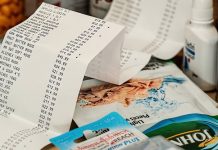 Supermarkets produce over 26,000 miles of till receipts weekly – to...