South Hams District Council in South Devon is the latest organisation to start collecting cartons at kerbside. Neil Greenhalgh, Operational Manager for Waste at South Hams District Council said: „We have listened to residents, reviewed suggestions, and made changes based on this feedback. This is a major milestone for recycling in the South Hams. Residents already recycle a lot of cartons at recycling banks and this will enable residents to recycle at home as well.”

The cartons will be recycled at the UK’s only dedicated beverage carton recycling facility at Stainland, West Yorkshire, a joint venture between ACE UK and its partner Sonoco Alcore. Capable of recycling 25,000 tonnes of cartons sorted from household and commercial waste streams, the facility currently receives cartons from 35 per cent of local authorities, through kerbside and bring bank schemes.

“It is great news that South Hams District Council is now collecting beverage cartons at kerbside, taking us to the 66 per cent milestone, which represents two in every three households in the UK. Our members – Tetra Pak, Elopak and SIG Combibloc – are extremely pleased that their strategy to increase kerbside collection and make it easier for residents to recycle cartons is paying dividends”, said Richard Hands, Chief Executive of ACE UK.

Source: The Alliance for Beverage Cartons and the Environment (ACE)

Beverage carton recycling on the rise in EU, but separate collection... 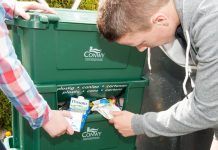