Bristol, UK — European policy permits the application of nutrient-rich sewage sludge on agricultural land as a means of recycling. However, contamination of sludge with microplastics may pose a risk to ecosystems. A new study looks at the characteristics of microplastics in sewage sludge after three types of waste-water treatment, finding that anaerobic digestion should be explored as a method of microplastic reduction.

Public awareness of the problem of microplastics (synthetic polymers smaller than 5 mm in diameter) in waste water is growing, and the Marine Strategy Framework Directive recognises that microplastics contribute to the serious problem of marine litter. Ideally, microplastics would be reduced in origin (a preventive approach) but they currently enter waste-water treatment plants from various sources, including manufacturing of plastics, products with intentionally added microplastics (e.g. cosmetics, detergents), rainwater and as synthetic fibres from clothing. Several studies have looked at microplastics in marine environments, but few have investigated microplastics on land, where they can be consumed by earthworms and birds, among other species.

The main objective of urban waste-water treatment plants is to remove organic matter and, when necessary, nutrients from domestic waste water, but, as the majority of microplastics end up in sewage sludge after waste-water processing, there is an opportunity to attempt their removal in the treatment of waste water. Sewage sludge is dealt with differently among EU Member States. In states that permit spreading sludge on land, EU legislation requires that it be treated to protect against health hazards, for example by lime stabilisation, anaerobic digestion, composting, or thermal drying. However, the researchers note that treatment can leave 99% of microplastics in sludge, potentially forming a source of pollution.

This study analysed sludge samples from seven treatment plants in Ireland, which use three different treatment processes: anaerobic digestion, thermal drying and lime stabilisation. Abundances of microplastic particles per kg (dry weight) found were 2,743 to 5,156 for anaerobic digestion; 4,197 to 15,395 for thermal drying; and 10,012 to 14,064 for lime stabilisation.

Analysis showed significantly higher amounts of smaller microplastics (<211 µm) in samples from plants using lime stabilisation, suggesting this process splits larger particles. Images of particles from scanning electron microscopy (SEM) showed that particles shredded and flaked under lime stabilisation, lending support to this theory. The researchers state that this effect is probably due to the elevated pH, temperature and mechanical mixing that occurs in lime stabilisation. The proportion of particles found at lime-stabilisation sites was also relatively high (14,064 and 10,012 particles per kg), but the sample size limits the drawing of conclusions from this.

Although the study is limited by the small sample size and lack of pre-treatment sampling, the results indicate that the type of process applied is likely to affect the abundance, size and form of microplastics in sewage sludge. The relative risk of different forms and sizes of microplastics in the environment has not been investigated, but it is possible that smaller particles could be more easily transported through the soil and into water. On land, weathering and sunlight can also break down some microplastics, such as polypropylene, into smaller particles, potentially exacerbating this problem. Microplastics also interact with organic matter in soil, causing them to attach to contaminants such as cadmium and lead, potentially adding to the risk posed by the spread of these particles in the environment.

Microplastics have been found on land 15 years after sewage-sludge application in New York state, but the researchers note that it is unclear whether agricultural land is more often a sink for microplastics or a source from which pollution spreads into the wider environment – this could be a focus for more research. It should also be noted that a potentially high amount of microplastics comes from the atmosphere, settling down on land and waters. In the context of the upcoming EU Strategy on Plastics in a Circular Economy, due to be presented in late 2017, further studies on microplastics are being undertaken; thus further studies of microplastics on land would be useful to monitor for changes in levels as a result of policy. 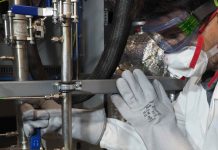 A More Efficient Way of Recovering Phosphorus from Sewage Sludge