Banbury, UK — The way the UK treats its clothes has changed over the past three years, a new study from sustainability not-for-profit organisation WRAP has found, with many changes in the way we treat our clothes helping to lessen the environmental impact of the UK’s wardrobes. Key is the discovery that people are less inclined to put unwanted clothes into the residual bin.

Since WRAP first highlighted the environmental impact of UK clothing in its pioneering 2012 report the amount of clothing discarded in residual waste has fallen by approximately 50,000 tonnes. The current estimate of clothing going into household bins has dropped from 350,000 tonnes (2012) to 300,000 tonnes (2015), a reduction equivalent in weight to more than 300 Jumbo Jets.

WRAP’s new report „Valuing our Clothes: The Cost of UK Fashion“ found that the way people care for their clothes is helping the environment.

People tend to launder our clothes at lower temperatures; turning the heat down from 40 to 30 degrees. The regular use of tumble-dryers and ironing has also fallen according to WRAP’s consumer research. These combined changes in behaviour have helped cut approximately 700,000 tonnes CO2e from UK emissions, each year. WRAP’s report also examines improvements within the clothing sector since the launch of its Sustainable Clothing Action Plan (SCAP) in 2013, the voluntary agreement designed and brokered by WRAP in partnership with Government and industry.

Since that time WRAP has worked closely with major clothing designers, brands, manufacturers, retailers, fashion houses and re-use & recycling organisations to drive forward more sustainable production and buying practices, and increase textiles re-use and recycling. This has been achieved through a range of SCAP initiatives varying from sustainable fibre procurement, to advice and support for households on caring for clothes and working to increase reuse and recycling. SCAP membership grew quickly and now accounts for more than half of the UK clothing market.

But while fewer clothes are ending their life in the household bin, the amount purchased over the same period has risen by nearly 200,000 tonnes to 1.13 million tonnes sold.

In total, the environmental footprint of UK clothing (including global and territorial emissions) has risen and now stands at more than 26 million tonnes of CO2e, up 2 million tonnes on 2012. This is due to a combination of relatively low prices, and increased population, and puts clothing fourth after housing, transport and food in terms of its impact on the environment.

WRAP is now calling on retailers and brands to focus on a number of priority garments*’ which it has found to have the highest environmental impacts in terms of their manufacture, and which sell in the largest volumes. Top of the list are women’s dresses, jumpers and jeans, followed by men’s t-shirts and jumpers. Women’s jeans were singled out in terms of the amount of water used during their production, while dresses and jumpers and men’s t-shirts – which are similar high volume products, require work to tackle their carbon and supply chain waste footprints.

Steve Creed, Director Business Programme WRAP, commented: “I am delighted by how well SCAP signatories are doing. At this stage of the agreement they are not only well on the way to achieving the targets, but continue to outperform the sector as a whole – particularly in sustainable cotton. It’s amazing that twenty percent more cotton is now sustainably-sourced by signatories than when we began. And having high-street names like M&S, Tesco and Sainsbury’s setting ambitious sustainable cotton targets will help ease the pressure on some of the world’s most water-sensitive countries.

“It’s great too that fewer clothes are ending up in the residual waste, but overall our carbon footprint is rising so the next few years are critical in balancing growing demand with supplying clothes more sustainably. I’m confident SCAP will play a big part in helping to make this happen, and make sustainable fashion much more mainstream.”

The report „Valuing our Clothes: The Cost of UK Fashion“ can be downloaded under wrap.org.uk. 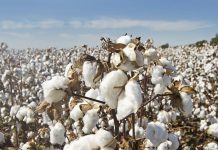