Horsham, UK — The latest YouGov research reveals 52 per cent of regular takeaway hot drink consumers, those that buy at least four or more drinks a week, dispose of their cup at work. Underpinned by insight into consumer coffee cup disposal habits, resource management company Veolia is rolling out its national coffee cup solution to make cup recycling possible in offices across the UK.

Supported by trials with partners such as Costa and Starbucks, Veolia’s coffee cup solution is now available to existing customers nationwide and to potential new customers, as part of a packaged service, and offers multiple service options. These include a specialist designed in-house recycling bin, a bulk collection option and a post back service – which is available to all business types nationally.

By capturing cups before they enter the general waste stream, Veolia’s solution aims to get a higher quality of material that can be reprocessed into a new product. And the public is on board. A staggering 88 per cent of the public would use a purpose-built recycling bin to ensure their disposable paper cup is recycled. Almost half (47 per cent) would even be willing to hold onto their cup for longer if they knew they would pass a purpose-built bin and nearly a quarter (24 per cent) would go out of their way to use one.

Estelle Brachlianoff, Senior Executive Vice-President at Veolia UK & Ireland, comments: “Over the last six months a lot of activities have been taking place with our customers, such as Costa and Starbucks to overcome our biggest challenge – contamination in the cups. As a result, we’ve worked on a solution that will separate the cup from the general waste stream as soon as the customer has enjoyed their drink.” And she added: „When it comes to coffee cups, I’d like to take this opportunity to further encourage a mass collaboration between designers, manufacturers, vendors and consumers as we all have a part to play in the ultimate solution – as well as those less obviously involved in helping to recycle coffee cups, such as offices, campuses and train stations.”

Once the consumer has “Tipped-it, flipped-it and stacked-it” – a process to ensure any remaining liquid is drained and the lid, sleeve and cup are separated – Veolia undertakes a further separation process to guarantee all rogue items have been removed. This is key because it will help to ensure a higher quality of material that can be reprocessed into a new product.

The in-house recycling bin has been purposely designed to enable the consumer to drain any remaining liquid from their cup and separate the lid, sleeve and cup to minimise contamination. After the cups have been debagged, separated, checked for quality and contamination and baled up they go on to further treatment at paper pulping facilities, which recover the fibres and separate the polymer plastic lining. Working with a number of outlets, the fibre could potentially be used to make a multitude of products such as egg boxes or cup holders given back out in stores or alternatively used in the manufacturing of cellulose-based insulation for homes. 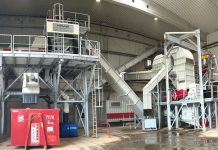