City of Paris has started separate collection of organic waste

Since May 4th the French capital has started implementing an ambitious project to boost circular economy involving the source separation by households of organic waste in the 2. and 12. arrondissements. This action is part of the overall project for waste reduction and recycling, to which the city committed in 2014. The targets to achieve are the following: reducing by 10 percent by weight the quantity of generated waste between 2010 and 2020 and increasing recycling from 15 percent to more than 50 percent.

As part of its Recovery Plan for sorting, the City has been conducting a massive policy for two years to strengthen the means to facilitate the sorting of Parisians by giving them more solutions (installation of several thousand additional sorting bins in garbage rooms) and increasing awareness of them (updating of instructions, dissemination of a new sorting guide, awareness-raising campaigns).

The implementation is backed by the Mayor of Paris, the Mayors of the 2. and 12. arrondissements, French agency for the environmental protection ADEME, the French network of bio-waste treatment facilities Réseau Compostplus, and Novamont, a leading company in the field of bioplastics.

The food discards of Parisians (from meal preparation to leftovers, and unused food still in packaging) is about 160,000 tons a year, or nearly one quarter of the content of the residual waste bin. This waste was until recently only collected mixed in with the general waste and was subsequently disposed of by incineration. The objective is now to collect this portion separately to be used in biogas and/or compost.

3,205 trays with brown lids have been distributed in all the buildings which have been identified as suitable. Other buildings will be dealt with at a later date. Basically, the project involves 74,161 flats located in 4,361 buildings covering around 120,000 people. the participating households have also been provided with new bags for the collection of food waste. These new bags are biodegradable according to the European standard EN 13432 and are made in Mater-Bi, a bio-plastic developed by Novamont. 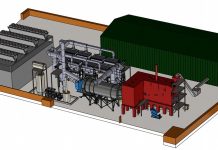 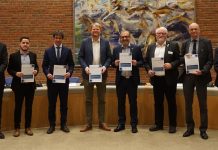