Brampton, Huntingdon / UK — The UK’s £5 billion metals recycling industry is calling for local authorities to speed up the processing of licences for scrap metal dealers six months after new legislation was implemented in England and Wales. The new Scrap Metal Dealers’ Act 2013 was introduced to limit the potential outlets for stolen metal and enable authorities to crack down on criminal activity. However, the British Metals Recycling Association (BMRA) says that the problem of delayed licences is affecting the ability of the authorities to enforce the new regime.

The new Act brought in a new licensing system run by local authorities for both mobile and site-based scrap metal dealers. Roughly 40 per cent of licences are still unissued after the 1 December 2013 enforcement date has passed, after which all operators are legally required to possess a licence. Therefore, a considerable number of scrap metal dealers are without a licence despite submitting their applications before the 15 October deadline. This is causing a loss of business for legitimate traders as many customers will only deal with licensed operators.

Ian Hetherington, director general of the BMRA, commented: “It is imperative that councils struggling with scrap metal dealer licences are given the adequate support to process them as quickly as possible. If not, legitimate traders may be put out of business as they are now required to possess a licence to operate legally.

“Enforcing the new legislation is a challenge for local authorities and police due to declining budgets and resources. However, the licences are self-financing so sufficient resources must be allocated. Otherwise the new system only increases the administrative burden for law-abiding dealers while illegal operators go unpunished and undermine the industry.”

Ian Hetherington added: “It was extremely concerning to hear that funding for the National Metal Theft Taskforce has been withdrawn and it will be disbanded due to a decreasing focus on metal theft. Home Offices figures which show a decline in metal theft offences across England and Wales in 2012/13 prove that coordinated enforcement is effective in reducing metal related crime. If the new Scrap Metal Dealers’ Act is not enforced properly then metal theft will increase in the long term and the police will be overwhelmed.” 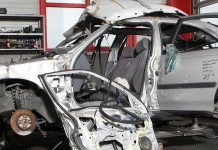 Serbia needs help from EU: Environmental standards have to be improved