Salzburg, Austria — Key members of the international e-waste sector again gathered for their annual congress in Salzburg; this year from January 17 to 20. The 16th International Electronics Recycling Congress IERC 2017 hosted some 480 participants and 60 exhibitors. The conference agenda offered a broad array of highlights, including around 30 presentations and a diversity of panel discussions and workshops as well as three excursions. With this comprehensive range, the IERC has again underscored its significance as one of the leading congresses in the field of electrical and electronics recycling worldwide.

The presentations covered the entire range of topics relating to the recycling of e-waste, including presentations on technical innovations for treating e-waste and new sorting technologies. The topics of circular economy and critical raw materials were also on the conference agenda. An interactive session awakened great interest among participants, who discussed with experts regarding current and future business models for recycling electrical and electronic waste.

Pressure on the viability of treatment processes

The discussions showed that although the economic situation of e-waste recyclers has improved slightly in some cases, it continues to be fraught with difficulty. The growing trend towards miniaturisation and the decreasing material value of devices in general continues to place pressure on the viability of treatment processes, further exacerbated by new challenges, such as the use of new types of complex material, which in many cases pose questions regarding how to recycle them at the end of their useful lives.
Traditionally, further key components of the IERC conference programme are the country reports. This year, experts reported on e-waste recycling in Chile, Columbia, Peru and Germany. The panel discussion on the cross-border shipment of waste also featured a strong international line-up, primarily focusing on the question of to which extent the shipment of waste contributes towards promoting the circular economy. During the discussion it became evident that the notification process is often considered far too complicated. For this reason, among other ideas, conference participants proposed simplifying the process in order to speed things up.

This year, the IERC Honorary Award went to Christian Müller-Guttenbrunn, Managing Partner and CEO of Müller-Guttenbrunn GmbH, which is based in Austria. He received the award for his life’s work, for the development of new recycling processes, and the founding of new cleantech enterprises in both Austria and Eastern Europe. The award was the second one for Christian Müller-Guttenbrunn within a short time, as only the previous day he had been given the European Business Award in the category for Environment and Sustainability. 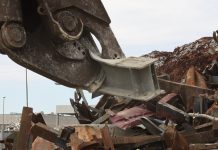