Bramhall, UK — The UK’s record-breaking Recovinyl performance contributed 21 percent – or 107,593 tonnes – to the total recycled through the PVC industry’s recycling scheme in 2015. It’s an increase of 13 percent compared to the previous year (2014: 95,525) and represents the equivalent of nearly 4.3 million PVC-U windows or 426,662 houses (assuming each house has 10 windows).

A total of 508,154 tonnes of waste PVC was recycled through Recovinyl last year across its 16 European member countries. The Recovinyl network currently comprises 163 companies. Recovinyl is an operational arm of VinylPlus, the European PVC industry sustainable development programme, which is tackling the sustainability challenges for PVC and delivery of current recycling targets to 2020. Waste PVC-U profiles (61,866 tonnes) comprised more than half of the UK’s recycling achievement in 2015, with pipes, rigid and flexible PVC films and cables making up the rest.

“The recycling of PVC continues to grow in line with continued investment in recycling infrastructure throughout the country and robust commitment from the sector. It’s a remarkable achievement that demonstrates the sustainability of this readily-recyclable material,” comments Project Manager Jane Gardner of Axion Consulting, Recovinyl’s UK agents.

Growing demand from manufacturers for good quality recycled material is a key factor behind the recycling success. Having already established significant volumes of PVC recycling with Vinyl 2010, Recovinyl’s strategy continues with consolidating and increasing the steady supply of PVC waste being recycled in Europe by creating demand – a ‘pull-market’ for recycled PVC material – from the converting industry.

New recycling initiatives for PVC are taking off in the UK, such as the collection of single-use waste PVC medical devices via RecoMed and the collection of PVC gift cards. RecoMed is funded by VinylPlus and undertaken jointly by Axion Consulting and the British Plastics Federation. The take-back scheme is now operational in seven hospitals across the UK and since early 2014 has recycled more than 830 kg of PVC waste. Jane Gardner adds: “RecoMed is growing, and we’re expecting more hospitals to join the scheme in 2016. It is estimated that up to 2,250 tonnes of PVC could be recycled by collecting these items alone from 150 hospitals in the UK, enabling them to save money on their waste disposal costs and increase recycling rates.” 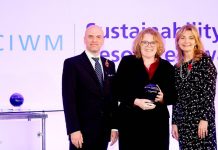