The advanced single stream system features a variety of technology to maximise the recovery and purity of recyclable commodities. Included are BHS screens, a Nihot Single Drum Separator and NRT In-Flight Sorting® optical sorters. Screen, air and optical technologies will be utilized to break, extract and purify the glass included in the commingled kerbside collection. NRT technology will also automate and enhance fibre recovery, with an NRT ColorPlus™ to remove cardboard from news and pams, and an NRT SpydIR® to remove any plastics from the mixed fibre stream. The system, designed to comply with the Scottish Government’s Code of Practice on Sampling and Reporting at Materials Recovery Facilities, features sampling, numerous scales to weigh inbound and outbound materials, and automated labeling of outbound bales.

The Single Stream materials recovery facilities (MRF) will process 60,000 tonnes-per-year and recover more than 95 per cent of available recyclables. The produce refuse-derived fuel (RDF) system will process 80,000 tonnes-per-year. “In the company’s design collaboration with BHS, SUEZ was clear from the onset that the total recovery and quality of commodities sent to market were paramount,” explained BHS CEO Steve Miller. “This design and the technology included in this system affirm that commitment and SUEZ should be commended for its forward-thinking approach. The SUEZ Altens East MRF will be instrumental to Aberdeen reaching its recycling targets and stand as a shining example for other communities to follow.”

SUEZ is purchasing, operating and maintaining the MRF on behalf of Aberdeen City Council. In 2000, the Council awarded SUEZ a 25-year contract to manage recycling, composting, treatment and disposal of the household waste for the local authority’s now more than 228,000 residents. The new MRF will increase the city’s 37 per cent recycling rate to 56 per cent by 2020 and could save the city up to £5 million a year in landfill taxes. The plans have been developed to meet the aims set out in the Aberdeen City Waste Strategy, are part of the Aberdeen Recycling and Energy initiative and are in line with Scotland’s Zero Waste Plan, which includes a 70 per cent recycling target by 2025. 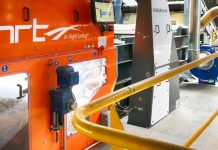