Barcelona, Spain – Researchers at the Universitat Autònoma de Barcelona are coordinating an EU LIFE Programme to explore the possibility of generating energy from the treatment of urban wastewater. The aim of the project is to radically re-design urban wastewater treatment plants (WWTP) so that they can produce energy with no loss – or even with a gain – in performance. Present-day WWTPs require a minimum energy consumption of 8 to 15 kWh/inhabitant/year to meet the legal requirements on effluent discharge in terms of organic matter, nitrogen and phosphorus. This means considerable greenhouse gas emissions and high costs. Eliminating these costs would mean a saving of 500 to 1000 million Euros per year in EU countries.

The Project Saving-E aims to demonstrate, at pilot scale and with real urban wastewater, that the energetic balance of an urban WWTP can be improved at both high and low temperatures, down to the 10º C that would be needed to implement the process in northern Europe, while achieving an annual energy production of 9 kWh per inhabitant.

This new WWTP will use all organic matter in the wastewater to produce biogas, a combustible gas made up principally of methane, which can be used to obtain heat and electricity. In addition, the nitrogen in the wastewater will be eliminated autotrophically, i.e. without the need for organic matter, by means of a new technology based on two biological stages: an aerobic partial-nitritation reactor and an anammox reactor. The scientists expect this new technology to significantly lower the costs of aeration in comparison with present-day urban WWTPs. „The technological challenge posed by treating urban wastewater while simultaneously generating clean energy is an exciting one. With the LIFE-Saving-E project we have a chance to do just that. We hope to be in a position to implement this novel technology at real scale in three or four years“, explains UAB lecturer Julián Carrera.

The project is headed by lecturers Julián Carrera, Maria Eugenia Suárez-Ojeda and Julio Pérez. The researchers belong to the research group Genocov, within the Department of Chemical, Biological and Environmental Engineering at the UAB, with 20 years‘ experience in research into water treatment. The project LIFE14 ENV/ES/000633 – Life Saving-E “Two-Stage Autotrophic N-removal for mainstream sewage treatment” includes the participation of Depuración de Aguas del Mediterráneo (DAM), Agència Catalana de l’Aigua (ACA) and Plataforma Tecnològica Europea per a l’Aigua (WssTP), and it has a total budget of 1,169,068 Euros, 58 percent of which is contributed by the European Union. 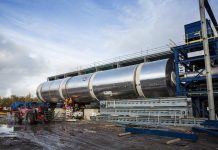