Lisbon, Portugal – According to preliminary International Copper Study Group (ICSG) data, the refined copper market for September 2015 showed an apparent production deficit of around 25,000 metric tonnes (t). When making seasonal adjustments for world refined production and usage, September showed a production surplus of 30,000 t. The refined copper balance for the first nine months of 2015, including revisions to data previously presented, indicates a production surplus of around 35,000 t (and a seasonally adjusted surplus of about 122,000 t). This compares with a production deficit of around 450,000 t (a seasonally adjusted deficit of about 375,000 t) for the same period of 2014.

World refined production is estimated to have increased by about 1.5 percent (230,000 t) in the first nine months of 2015 compared with refined production in the same period of 2014: primary production was up by 1 percent and secondary production (from scrap) was up by 4.5 percent. The main contributor to growth was China (up by 3.5 percent), followed by the Philippines and Indonesia where production was reduced in the first quarter of last year due to operational constraints. Production also increased in the DRC (+7 percent). Output in Chile and Japan (the second and third leading refined copper producers) declined by 2.5 percent and 2 percent, respectively, while in the United States (the fourth largest producer of refined copper), production dropped by 5 percent. On a regional basis, refined output is estimated to have increased in Africa (7 percent) and Asia (3.5 percent) and decreased in the Americas (-2 percent) and in Oceania (-17 percent) while remaining essentially unchanged in Europe. The average world refinery capacity utilization rate for the first nine months of 2015 declined slightly to around 82 percent from 82.5 percent in the same period of 2014. 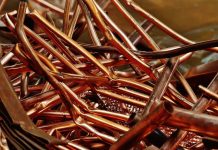 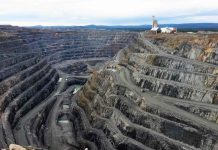