Cardiff, Wales — A joint Welsh Government and Defra consultation sought views on six waste crime proposals in February, four of which will come into force on October 30, to help strengthen Natural Resources Wales’ (NRW) powers and abilities to take speedier and more effective action to tackle poor performing and illegal operators across the industry. The Minister for Natural Resources Carl Sargeant and the Chief Executive of Natural Resources Wales Emyr Roberts have welcomed the new powers.

The Minister for Natural Resources, Carl Sargeant, commented: “Around 94 per cent of waste management operators in Wales are good, honest performers so there is only a small fraction of these poor performers and waste criminals that needs to be dealt with. We have made it a priority to sort out these unscrupulous operators to ensure that waste crime doesn’t pay. The Welsh Government, together with Natural Resources Wales (NRW), Defra and the Environment Agency has worked together to identify ways to strengthen our existing enforcement powers. We are working on bringing more legislation next year which will further strengthen NRW’s powers to help tackle waste crime.”

The Chief Executive of Natural Resources Wales, Emyr Roberts, argued: “Waste crime can be a danger to the environment and to people’s health. We are determined to make sure that waste crime does not pay, our officers across the country regulate waste sites and we will prosecute waste operators who don’t abide by the law. The new enhanced enforcement powers that come into force today will strengthen our hand in tackling waste crime in Wales.” 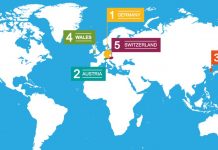