In the first eight months of 2015, world apparent usage is estimated to have declined by around 2 percent (295,000 t) compared with that in the same period of 2014. Excluding China, world usage declined by around 4 percent. Although Chinese apparent demand increased by around 0.5 percent, usage declined by 5 percent and 7 percent in the EU and Japan, respectively, and by 50 percent in Russia (following the withdrawal of Russia’s cathode export tax in September 2014). On a regional basis, usage is estimated to have remained essentially unchanged in Asia while increasing by around 2 percent in Africa and in the Americas and declining by 11 percent and 63 percent in Europe and Oceania, respectively.

World refined production is estimated to have increased by 1.6 percent (235,000 t) in the first eight months of 2015 compared with refined production in the same period of 2014: primary production was up by 1 percent and secondary production (from scrap) was up by 3.5 percent. The main contributor to growth was China (up by 4 percent), followed by the Philippines and Indonesia where production was reduced in the first quarter of last year due to operational constraints. Production also increased in the DRC (+8 percent). Output in Chile and Japan (the second and third leading refined copper producers) declined by 3 percent and 2 percent, respectively, while in the United States (the fourth largest producer of refined copper), production dropped by 7 percent. On a regional basis, refined output is estimated to have increased in Africa (8 percent) and Asia (4 percent) and decreased in the Americas (-2.5 percent) and in Oceania (-19 percent) while remaining essentially unchanged in Europe. The average world refinery capacity utilization rate for the first eight months of 2015 declined slightly to around 81 percent from 81.5 percent in the same period of 2014. 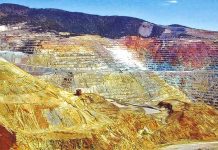