Excluding the impact of metal price lag in both periods, adjusted EBITDA was $236 million in the second quarter of fiscal 2016, up seven percent compared to $221 million in the prior year. The increase was driven by higher shipments of premium automotive and beverage can sheet, partially offset by less favorable recycling benefits due to lower aluminum prices as compared to the prior year. Current year results also reflect higher costs associated with the start-up and support of new automotive finishing and recycling capacity.

„Our focus on growing premium can, automotive and high-end specialty shipments, managing costs and reducing working capital is delivering results,“ said Steve Fisher, President and Chief Executive Officer for Novelis. „We are leveraging new assets, reducing start-up costs, and building momentum in our expanded automotive and can sheet businesses. We are now commissioning our two most recently constructed automotive lines in the US and Germany and solidifying our position as the global leader in aluminum flat rolled products.“

Shipments of rolled aluminum products totaled a record 788 kilotonnes in the second quarter of fiscal 2016, a three percent increase compared to 765 kilotonnes reported in the prior year period. However, sharply lower average aluminum prices and local market premiums drove a twelve percent decrease in revenues to $2.5 billion for the second quarter of fiscal 2016 compared to $2.8 billion in fiscal 2015.

Average local market metal premiums continued to decline in the second quarter of fiscal 2016 creating negative metal price lag of $54 million. Although the company uses derivatives contracts to minimize the price lag associated with LME base aluminum prices, it does not use derivative contracts for local market premiums, as adequate cost-effective hedges are not available. Adjusted EBITDA for the second quarter of fiscal 2016 including metal price lag was $182 million. 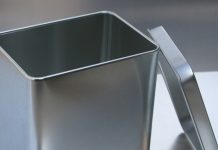