Brussels – Despite the general focus of attention on China’s economic slowdown, the country’s imports of recovered paper from Europe have mounted a stout recovery in 2015, according to data presented by Ranjit Singh Baxi of UK-based J & H Sales International to the BIR Paper Division meeting held in Prague on October 26 .

Ranjit Singh Baxi, who is BIR’s World President and also Honorary President of its Paper Division, said that China had imported 19.24m tonnes of recovered paper from all sources in the opening eight months of this year compared to 18.607m tonnes in last year’s corresponding period, with Europe posting the biggest increase as its deliveries to China jumped from 5.136m tonnes to 5.923m tonnes. In contrast, North America’s exports to China slipped from 9.753m tonnes to 9.626m tonnes – a phenomenon that Baxi ascribed in part to the strength of the domestic US market.

The speaker anticipated a slight increase in Europe’s exports to China in the near to medium term while the Asian giant was expected to offer “sustained levels of demand”. He anticipated that Chinese mills would increase their consumption of domestic fibre as collections continued to grow at home, but also that low freight rates would help to keep export pricing “competitive”. And for any business with China, he emphasised: “Quality is and must remain the central focus.”

Regionalised European reports underlined the strong influence of China on market developments worldwide. However, divisional Honorary President Dominique Maguin of La Compagnie des Matières Premières in France argued that whereas China had long been regarded as “the solution” for Europe’s surplus recovered paper, there was now a need to “push for new markets”. He also underlined that paper recycling businesses needed to make money in order to be able to invest in their operations and to deliver the quality of fibre demanded by the mills.

Under pressure from red tape everywhere

In his own review of recent market developments, divisional President Reinhold Schmidt once again stressed the difficulties for paper recyclers caused by the shorter contract periods with municipalities. The recovered paper sector was “under pressure from red tape everywhere”, he added.

Guest speaker Balázs Makó, Managing Director of PMR GmbH of Hungary and board member of the Hungarian recycling association HOE, also touched on the sometimes conflicting interests of local authorities and the private sector in his home country. However, he also emphasised that municipalities needed the expertise private paper recyclers could offer. “They don’t have the know-how,” he asserted.

The session’s other guest speaker was Jaroslav Tymich, Executive and Managing Director of EuroWaste (Mondi Group), Vice President of the Association of Czech Pulp and Paper Industry and a member of the raw material committee of the Confederation of European Paper Industries (CEPI). In reviewing paper trends in Eastern Europe, he highlighted national paper recycling rates of typically 40-50 percent and also Russia’s recent decision to ban recovered paper exports for three months.

Having heard European Recovered Paper Association President Merja Helander of Finland report a “record high” paper recycling rate of 71.7 percent for Europe last year, Mr Tymich confirmed that CEPI would use the target of a 74 percent recycling rate by the year 2020 as the basis for discussions with partners regarding the voluntary European Declaration on Paper Recycling commitment for the next five years. 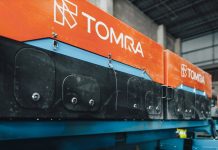