Leeds, UK – Retailers in England are being accused of ripping off their customers by bumping up the price of reusable bags in the wake of the introduction of the plastic bag tax. A national waste and recycling management company which campaigned for the introduction of the bag tax says its seen stores charging up to £9 for hessian shopping bags which cost pennies to produce. According to Yorkshire-based BusinessWaste.co.uk, some major stores are taking advantage of English shoppers as they rush out to buy alternatives to single-use plastic bags, motivated by the almost natural urge to turn a bigger profit.

„Despite all the moaning in the press about the plastic bag tax, it’s a good thing that should be applauded,“ explains BusinessWaste.co.uk spokesperson Mark Hall. „The major pity is that some companies have seen fit to nudge up the prices of their reusable bags as soon as the tax was introduced.“

According to BusinessWaste.co.uk, shoppers have reported inflated prices for different kinds of reusable bags:

„We’re not in the business of naming-and-shaming retailers, no matter how big or small they are,“ says Mark Hall, „But the plain fact is that shops are ripping off customers left, right and centre. Primarily the whole point of the plastic bag tax was to encourage people to get into the habit of shopping with multiple-use bags, rather than use just as many disposable bags as they did before.

Figures released earlier this year show how successful the policy has been in other parts of the UK where the bag tax has been a reality for some time:

„Last year saw 7.64 billion plastic bags used in England, and that’s thousands of tonnes of waste going to landfill,“ Mark Hall states. „If we see the same reduction as the rest of the UK, we can easily aim for a 5 billion bag reduction within a couple of years.“

At the top of the list of retailers going about it the right way is Tesco, who are only charging shoppers 10p for their stronger Bags For Life, a welcome reduction from the usual higher price. „And that’s the good news. If millions of Tesco customers follow their favourite supermarket’s lead, billions of plastic bags will be saved from landfill sites, and tonnes of resources will be saved.“

But this can’t be achieved without the retail sector helping customers to change their mind-set from single-use bags to bags for life. „Now is the time for shops to encourage their customers to build up their stock of reusable bags, and not penalise them for it,“ says Hall. But as long as customers are charged £9 for fancy reusable bags, it’s going to be difficult to convince English customers reusable bags are a good idea. „Come on stores,“ demands Hall, „End this rip-off!“ 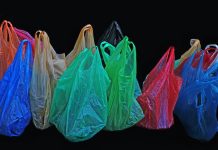