Bonn, Germany — The intrinsic material value of global e-waste is estimated to be 48 billion euro in 2014. The material value is dominated by gold, copper and plastics contents. The annual supply of toxins from e-waste is comprised of 2.2 Mt of lead glass, 0.3 Mt of batteries and 4 kilo tonnes (kt) of ozone-depleting suubstances. Only 6.5 Mt of the 41.8 Mt of e-waste are documented and recycled with the highest standards. These are some key figures of the latest new United Nations University report on „The Global E-waste Monitor 2014: Quantities, Flows and Resources“.

The report provides an unprecedented level of detail and accuracy about the size of the world’s e-waste challenge, ongoing progress in establishing specialized e-waste collection and treatment systems, and the outlook for the future. The bulk of global e-waste in 2014 (almost 60 percent) was discarded kitchen, laundry, and bathroom equipment. Personal information and communication technology (ICT) devices – such as mobile phones, personal computers, and printers – accounted for 7 percent of e-waste last year.

This e-waste represented some US-$52 billion (€42.4 billion) of potentially reusable resources, yet little of it was collected for recovery, or even treated/disposed of in an environmentally sound manner. Less than one-sixth is thought to have been properly recycled or made available for reuse. While e-waste constitutes a valuable „urban mine“ – a potential reservoir of recyclable materials – it also includes a „toxic mine“ of hazardous substances that must be (but too-seldom are) managed with extreme care.

The UNU report estimates that the e-waste discarded in 2014 contained an some 16,500 kilotons of iron, 1,900 kilotons of copper, and 300 tonnes of gold as well as significant amounts of silver, aluminum, palladium, and other potentially reusable resources, with a combined estimated value of US$52 billion. It also contained substantial amounts of health-threatening toxins such as mercury, cadmium, chromium, and ozone-depleting chlorofluorocarbons.

According to the report, just two countries – the US and China – discarded nearly one-third of the world’s total e-waste in 2014.

The Global E-Waste Monitor 2014 can be downloaded under unu.edu. 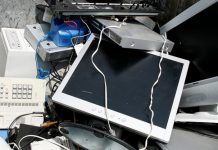 International E-Waste Day brought together stakeholders across the world