Tomelilla, Sweden — Ragn-Sells is currently expanding its operation by adding new capacity to its recycling plants in Karlstad, Norrköping and Örebro. Two new Presona LP 85 VH2 balers will allow the company to sort and bale all waste paper for Pressretur in Värmland, Östergötland and Närke. They will also be able to process more corrugated cardboard, plastic and other waste materials.

It started way back in 2006, when Ragn-Sells won a contract from Pressretur in Värmland. This was when the company bought its first Presona press for the plant in Karlstad. “When we were due to start baling waste paper in Karlstad, we of course looked at solutions from various suppliers. The result was that we decided for a baling press from Presona, an LP 80 VH1, and it has been working really well ever since. The company eventually grew with larger quantities of waste paper, but also corrugated cardboard and plastic, and as a result in recent years we had to run three shifts,” says Lars Nordström, Ragn-Sell’s departmental manager for Värmland/Örebro.

A clear choice
When Ragn-Sells went to buy new machines, they needed higher capacity balers. As a result of the company’s previous good experiences from Karlstad, where the Presona baler had proved to be hard-working, stable and reliable, another Persona machine was a clear choice. It helps to have coordinated technology within a company, and Ragn-Sells now has seven Presona balers operating in its Swedish operation.

Even the baler is being re-used
The baler in Karlstad has been working hard for almost 10 years, but it is far from worn-out, so now it lives on in Örebro. “Currently we do not need as much capacity in Örebro as in Karlstad, so the simplest and best solution was simply to move the old baler there. It has been properly serviced and parts had been replaced as they wore out, so it works really well and has many years of service left in it. And of course re-using is the most efficient form of recycling, which is something we are specialists in,” says Lars Nordström.

Sorting increases the value of material
The new balers are supplied with Presona’s sorting systems, where all material that is not to be included in the process is manually removed. Paper mills that manufacture new paper from waste paper set high requirements in terms of material purity. However since this also means that the waste material is worth more, sorting is profitable.

Balers to be working in April
Delivery and installation of the machines at all three sites is now underway, and in April all the presses will be working and playing an important part in the more efficient re-use of valuable raw materials in Sweden and the world. 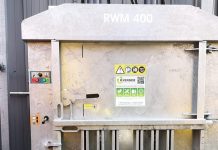 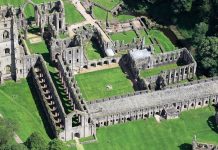 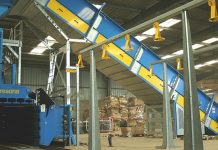