Geneva, New York, USA — The electronic waste (e-waste) recycler E-Waste Systems, Inc. (EWSI) has abandoned its primary US-based recycling operations, leaving behind significant volumes of hazardous e-waste. The Geneva, New York facility is no longer accepting materials, and various e-waste collections events had been cancelled. Workers have not been paid since mid of October, despite never receiving pink slips of termination. Due to failure to pay the rent, the landlord locked the doors on January 28. EWSI similarly abandoned their Ohio facility near Cincinnati late last year.

„We have yet another alarming case of e-waste mismanagement,“ said Basel Action Network Executive Director Jim Puckett. „Far too many irresponsible electronics recyclers hide behind the green word ‚recycling‘ but operate like horse traders. This latest abandonment underscores the need for all consumers and business customers to do their due diligence. It also proves that governments‘ need to monitor and strictly enforce the applicable laws,“ said Puckett. „The public should beware.“

Sources have informed BAN that EWSI left behind a large quantity of material, in both its New York and Ohio locations. In Geneva, New York, an estimated eight truckloads of cathode ray tubes (CRT) and around a million pounds of intact televisions remain in the plant.

According to Basel Action Network, financial mismanagement and a lack of capital appear to be the cause for the EWSI closures, a concern regularly covered by E-Scrap News and other outlets in the last few years. EWSI became famous in the industry for its penny stock capitalization, then later its reverse stock split, and for overstating its revenue in an annual government financial filing. EWSI was also well known for its constant press releases claiming new global expansion activities, new strategic partnerships, and new acquisitions, despite little evidence of actual financial investment or growth. While chief executive officer and founder Martin Nielson made many promises and spoke the language of responsible recycling, EWSI’s penny stock kept plummeting. It is currently listed at $0.0004/share.

This latest story follows in the wake of companies in Arizona, Colorado, Maryland, Utah, Ohio, Georgia and other states that recently abandoned large piles of e-waste or sent it to irresponsible operations overseas or in the US. 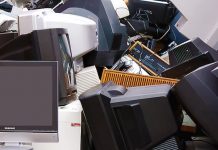 CWIT: Only one third of European WEEE is officially collected and recycled