London — According to a new Environment Agency report, the UK waste industry has recently shown steady year on year growth in turnover from £15.3 billion in 2008 to £18.5 billion in 2013. The waste industry in England now holds over 11,000 Environmental Permitting Regulations (EPR) permits issued by the Environment Agency; 81 per cent of EPR permits. The number of permitted facilities increased by 19 per cent between 2010 and 2013. The increases in waste treatment permits are mostly in non-hazardous waste treatment and metals recycling.

In recent years, more waste has been re-used and recycled, and less landfilled. Tax on landfilled waste was introduced in 1996 as a method of reducing the amount of waste sent to landfill sites. It was intended to encourage waste producers to use more sustainable waste management methods, such as recycling or composting. The sites the Environment Agency regulates recovered 59 per cent of their waste in 2013, compared to 39 per cent in 2000. A third of waste produced by sites the agency regulates is sent to landfill; the lowest proportion on record.

More used as a resource

More waste is being used as a resource. Where possible, we produce a quality protocol for each examined waste material, which clearly explains what has to be done to produce a fully-recovered, non-waste, quality product. As a result over 20 million tonnes of ‘waste’ has been diverted from landfill since 2012/13, representing a saving of about £275 million to businesses (eg by avoiding landfill costs, and by enabling business to sell the materials involved).

More refuse derived fuel (RDF) is being produced, and more sites are managing it:

The full report can be downloaded from gov.uk. 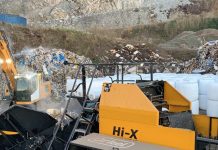